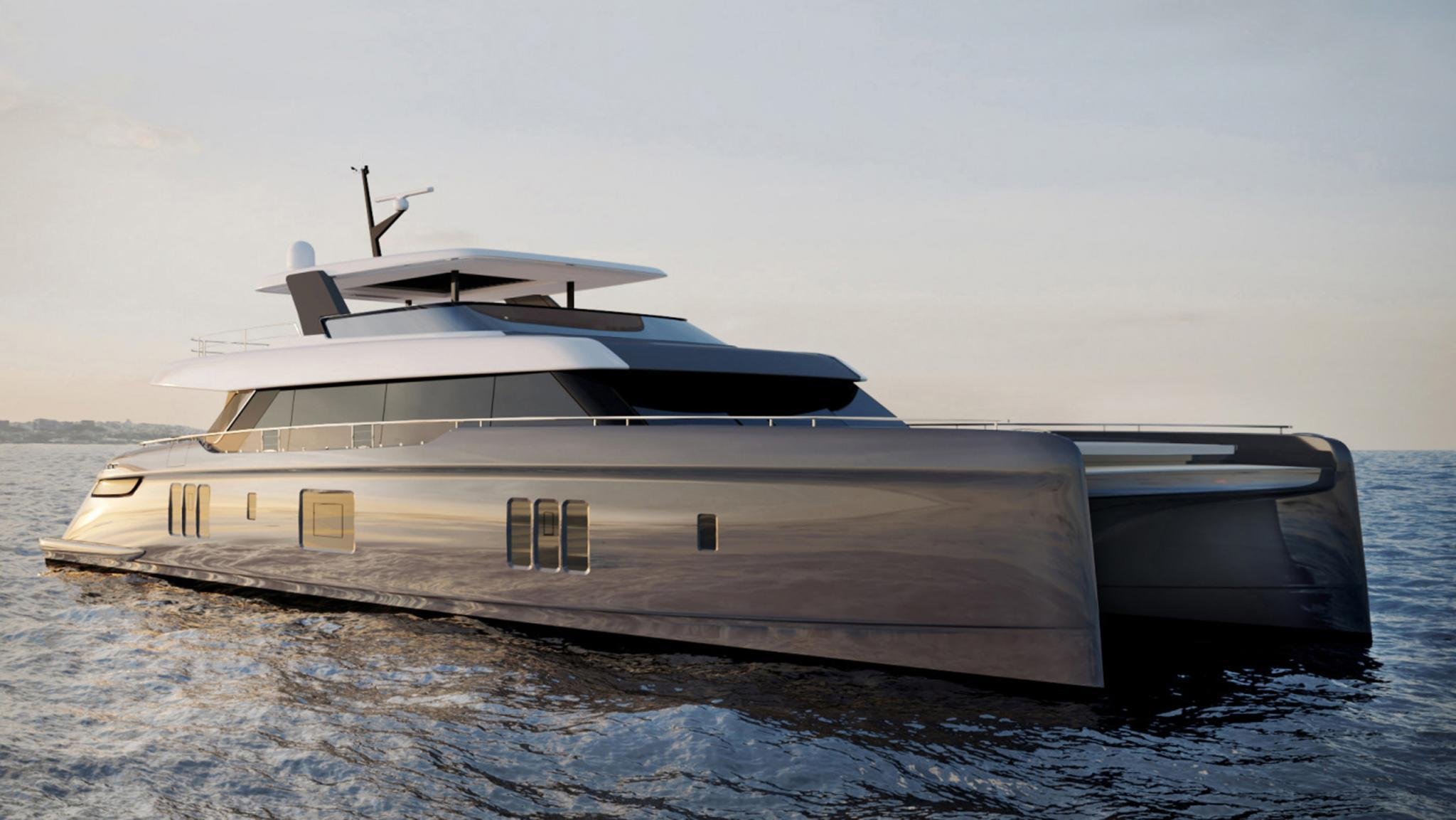 What do celebs like pro-athlete Rafa Nadal, actress Nicole Kidman, and designer Giorgio Armani, all have in common? Bursting bank accounts and a taste for superyachts. Sneak a peek inside our top 10 favorite celeb superyachts.

From actress Nicole Kidman to designer Giorgio Armani, what do all the celebs on this list have in common? Bursting bank accounts and a taste for uber luxe boats.

Inspired by Rafa Nadal’s new yacht, we thought we’d round up our favorite superyachts as worthy of admiration as their super rich and famous owners. It’s no surprise celebs flock to these waterbound oases, they’re the perfect escape for hiding away when everybody knows your face.

Curious to sneak a peek inside? Feast your eyes on our top 10 favorite celeb superyachts. 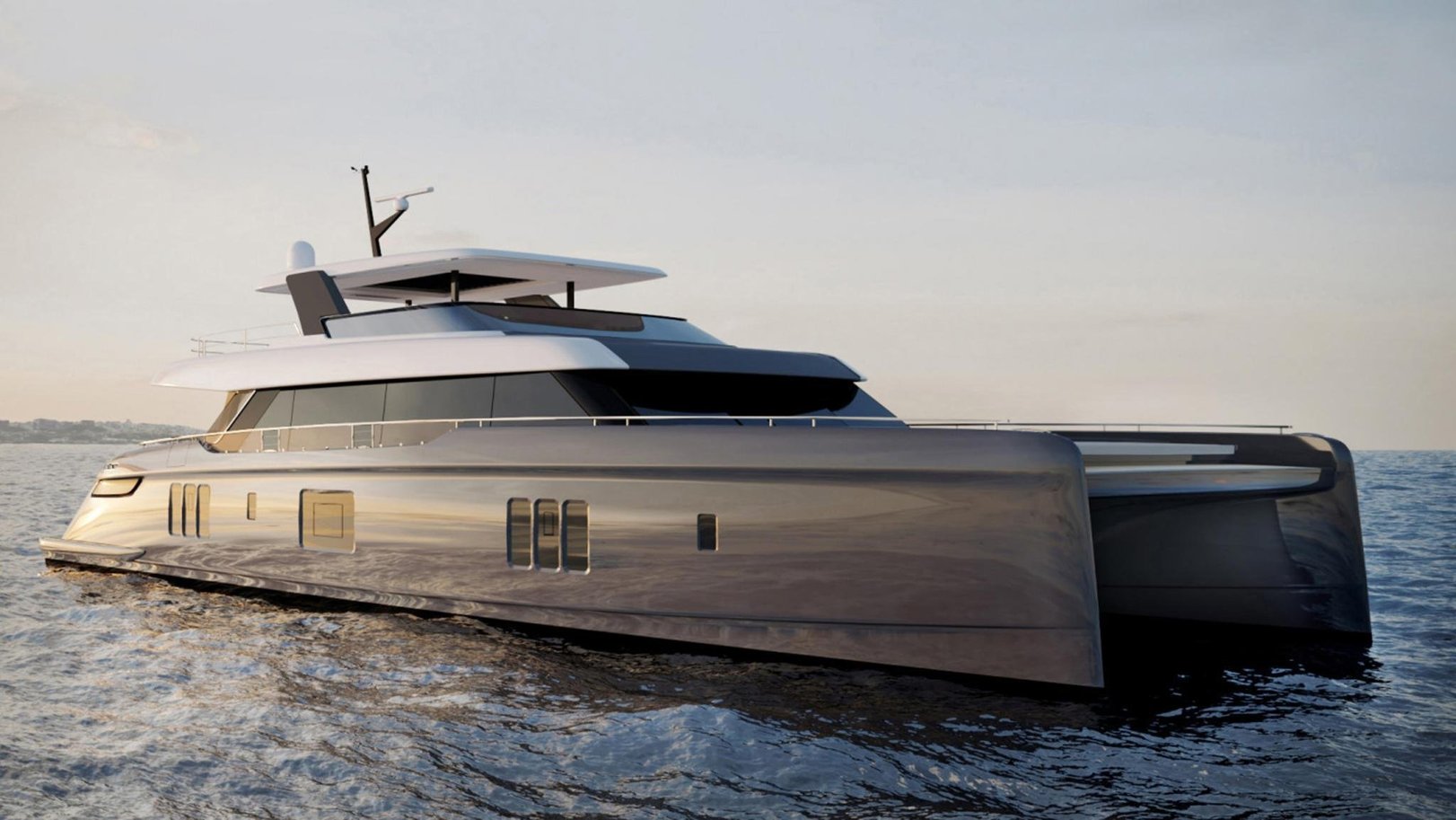 When he’s not on the court, 19-time Grand Slam champion Rafa Nadal, enjoys his freetime offshore. As an self-proclaimed ocean addict, the Balearic born Spaniard often jumps on his luxury vessel to relax in the middle of the Mediterranean, far away from the crowds. 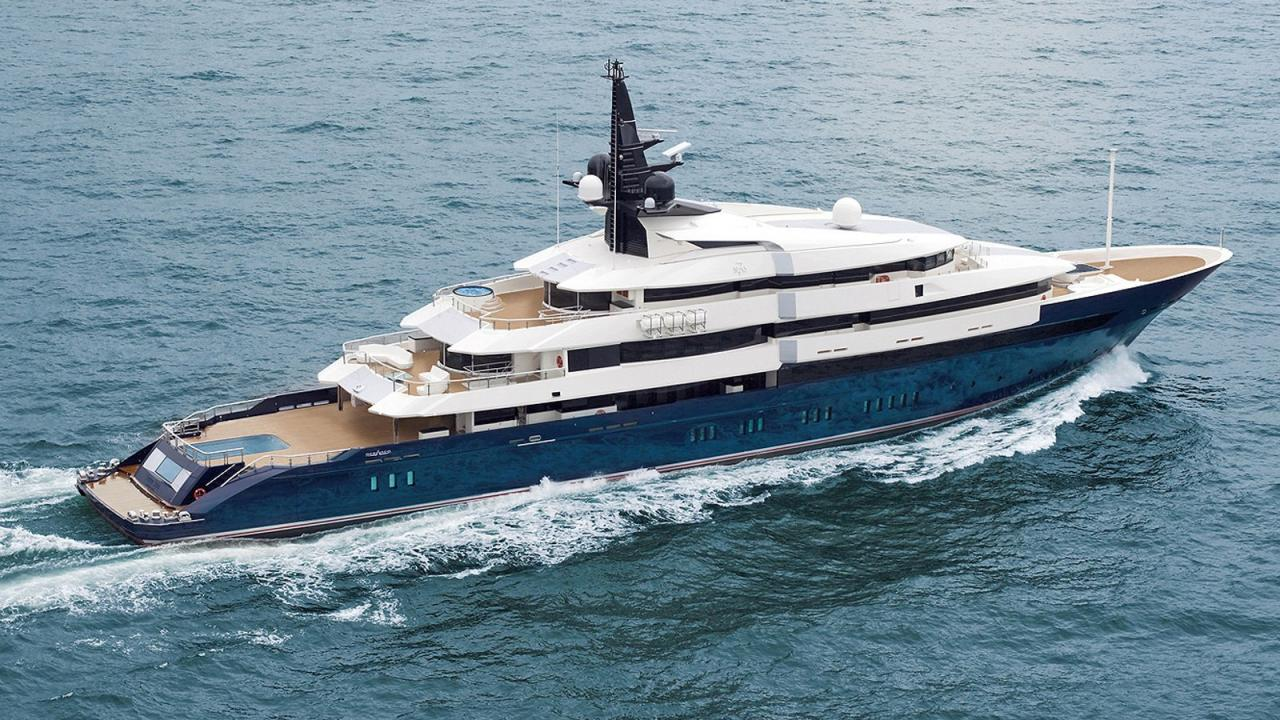 Seven Seas, a rather classic and timeless name, right? Seems fitting then, the owner of this 282-feet Oceanco built superyacht is iconic Hollywood director Steven Spielberg.

The steel hulled superyacht that can reach a maximum speed of 20 knots and accommodates 12 guests is equipped with everything you’d need to turn life into a paradise.

Besides a private owner's deck and a private jacuzzi deck, there’s also a helicopter pad, top-notch gym, spa centre, massage rooms, and no surprise—a large silver screen streaming some of the best Hollywood movies of all time.

Interested? Well, if you can afford the $185 million price tag, it's your lucky day: Steven Spielberg announced that he wants to sell this beauty, because 282-feet is just a little too small for him. Apparently we all have our worries... 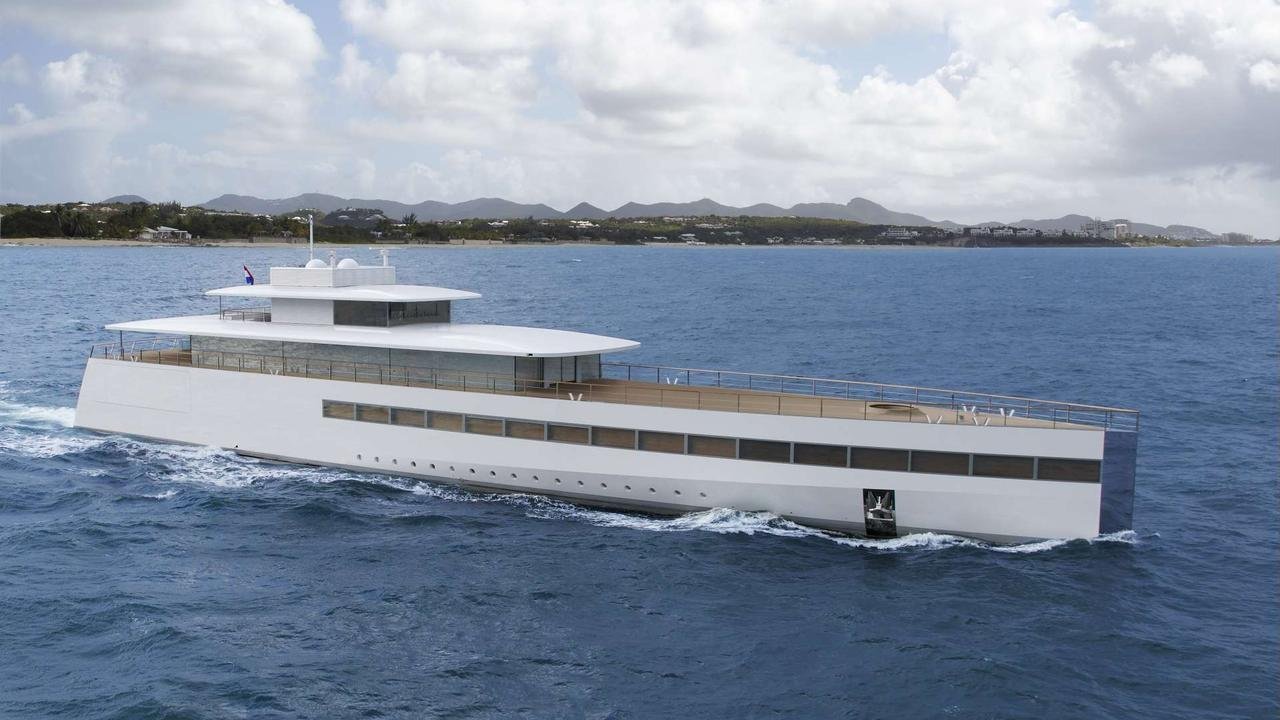 Almost as famous as her owner himself—due to how few details are published about it—this custom 250-feet Feadship superyacht Venus was built for Apple Inc. founder Steve Jobs.

Although sadly not finished before his death, Jobs’ contribution to the design process—along with bespoke yacht designer Philippe Starck—is undeniable. It’s sleek, all-aluminium, and glass covered design invokes a signature look we’re all familiar with.

The extremely high-tech vessel, recently underwent a refit in France, revealing some of her exclusive amenities like her Mac-packed bridge and her garage hosting a Pascoe tender.  We’d expected no less from the man who built the Apple empire. 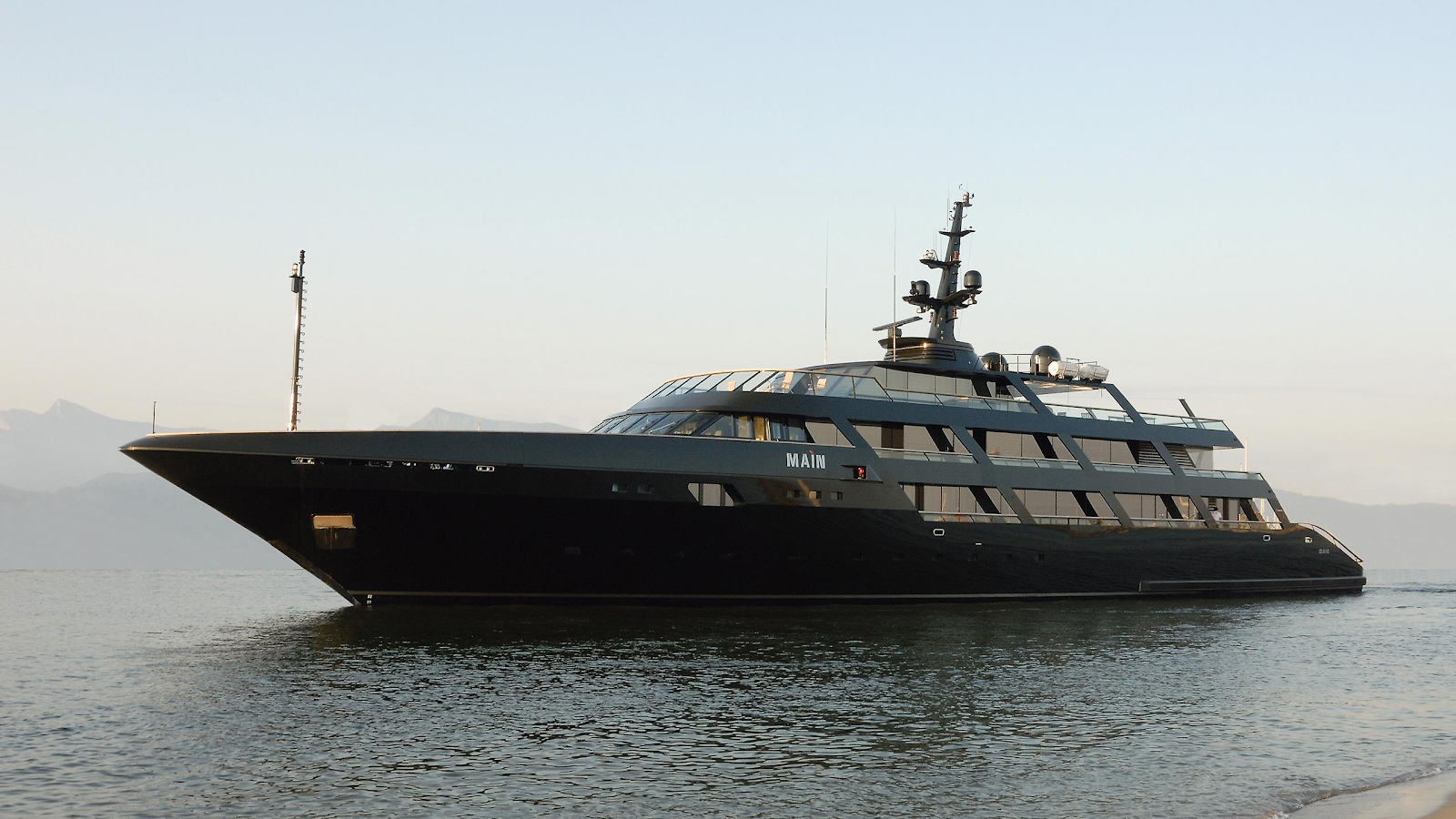 The 65-metre yacht was built by Codecasa and entirely designed by the fashion guru himself, putting in everything he considered important at sea and, at the same time, “introducing a concept of the home.”

Main boasts large interior spaces and features wow factors like a spiral staircase, gym, cinema, and guest accommodation for up to 14.

The yacht was painted in an unusual dark green colour with the aim to camouflage her at sea, so she doesn't appear too “flashy.” Minimalism, Armani's ultimate goal on and offshore. 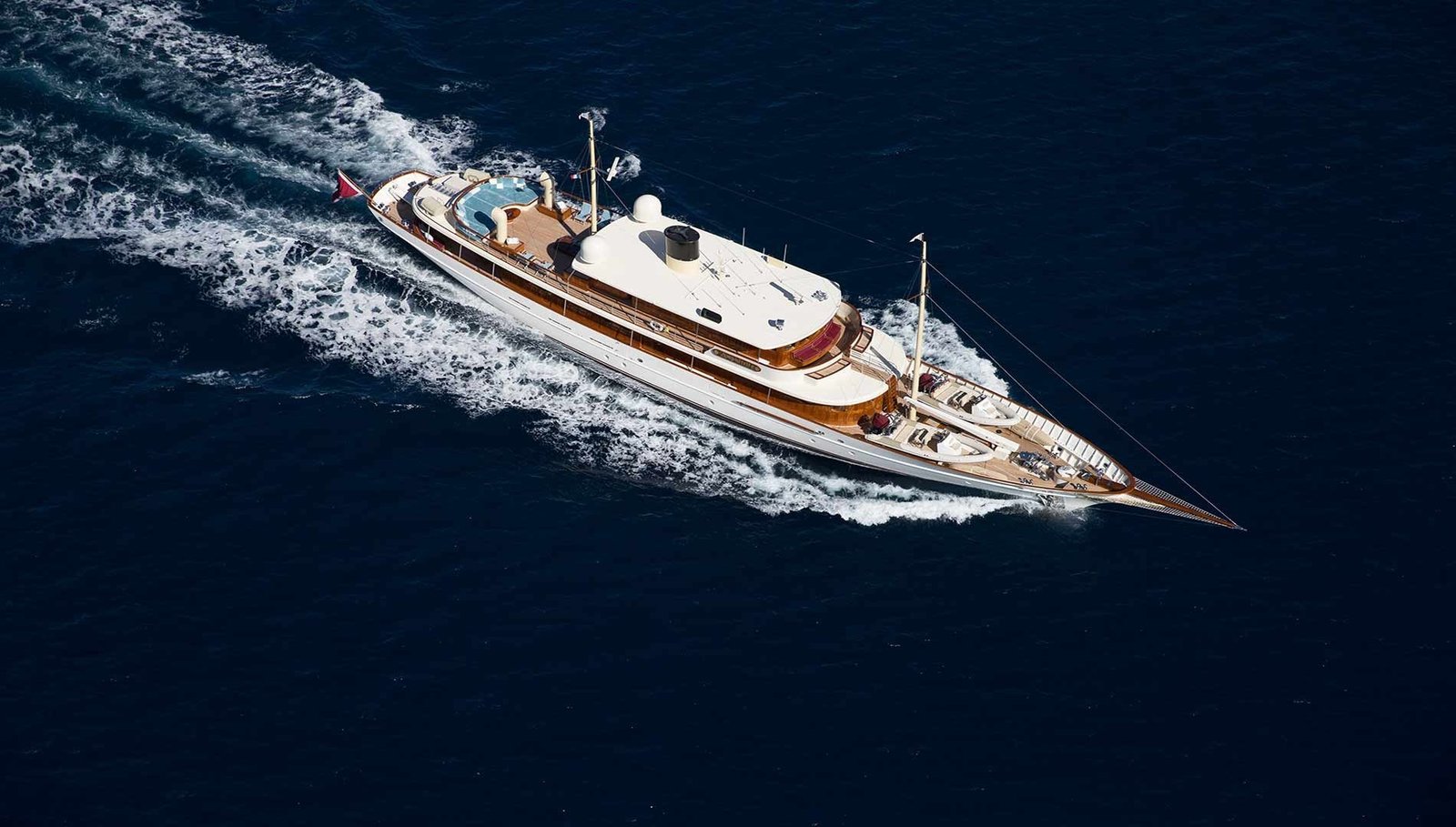 Is there any better place to find inspiration than out to sea? Ask J. K. Rowling, the famous Harry Potter author and owner of Amphitrite, a 150-foot motor yacht built by Turkish luxury shipyard Turquoise.

Rowling purchased the yacht (formerly Vajoliroja) in 2016 for $19 million from none other than actor Johnny Depp and reportedly sold it again in 2017 to an undisclosed buyer.

The bottom line: it’s clear this boat is a favorite amongst the whimsical-at-heart. 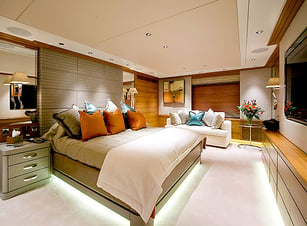 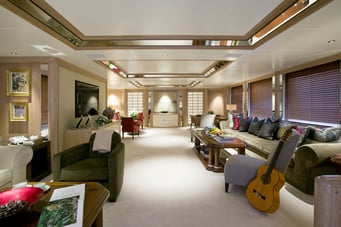 The best place to escape from it all? A superyacht, for sure! World famous rockstar Eric Clapton’s luxury hideaway is a 156-foot motor yacht built by Cornelissen and dubbed Va Bene.

The $10 million vessel splits into three decks and can host up to 12 guests and 13 crew members in her distinctly Art Deco styled amenities.

And as the yacht of one of the world's most famous musicians, no surprise music is another big feature throughout the vessel. All suites and guest areas have discreetly placed Arcam iPod docking stations, so guests can blast their own playlists. 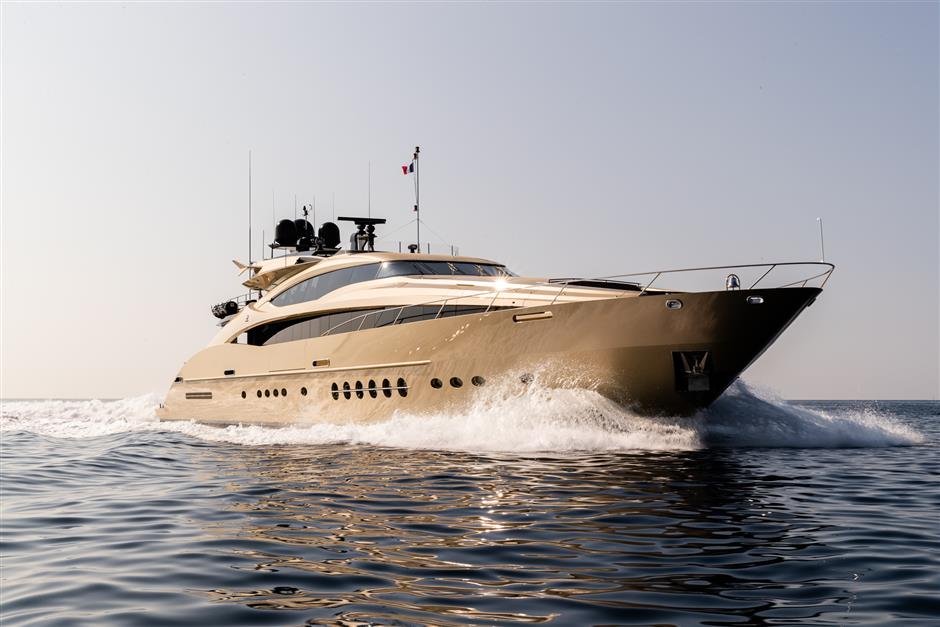 Being one of the most celebrated actresses in the world, comes with its perks, and apparently for Nicole Kidman that includes owning an extremely luxe superyacht.

Hokulani, a champagne-colored Sunseeker Manhattan 74 yacht, is a tri-deck motor yacht that boasts an expansive swimming deck, six exclusive suites, and separate quarters for crew. Plus, an entertainment room and a huge collection of water toys!

Reportedly, Hokulani is the name Kidman was given by her parents at birth and means heavenly star in Hawaiian. The Aussie was actually born on the Hawaiian island Oahu.  The yacht has a heavy price tag of $4.5 million, but well, compared to the actress's estimated $259 million US net worth, that's peanuts.

The $65-million Maraya offers the ultimate indulgence throughout and accommodates up to 12 guests in exclusive suites. The master suite boasts a private balcony that can be lowered when the yacht is anchored.

It's not hard to imagine that the yacht reportedly features a stage given her owner’s love for lavish parties. Plus, a dance floor with a bar and a huge digital video screen—just in case anyone of his famous friends is up for a private concert offshore.

The Edge and Bono don’t only share a stage as super successful U2 bandmates, but they swap weekends with their 160-foot superyacht called Cyan, built by Codecasa.

There’s no shortage of ‘Beautiful Days’ on this uber luxe vessel, boasting six cabins for up to 12 guests, an expansive deck pool, a jacuzzi, a formal dining room, a gym, plenty of water toys, a baby grand piano and last but not least, one of the best outdoor cinemas found on a superyacht. It has a three meter screen!

On top of this—and true to form—the $14 million dollar gem features a bespoke top of the range stereo system.Ever wanted to live like a true rockstar? Cyan is also available for charter, but it’ll cost you a whopping $224,000 per week in high season and ‘just’ $207,000 in low season.

Apparently, there’s no limits for the rich and famous when it comes to outfitting your vessel. Though extravagant mega yachts like these aren’t in everybody's future, you can’t put a price tag on the most important part about boating and those are in reach for us: the freedom and relaxation that comes with cruising the wide, open sea.

Want to get aboard? Search our listings for your own luxury getaway. 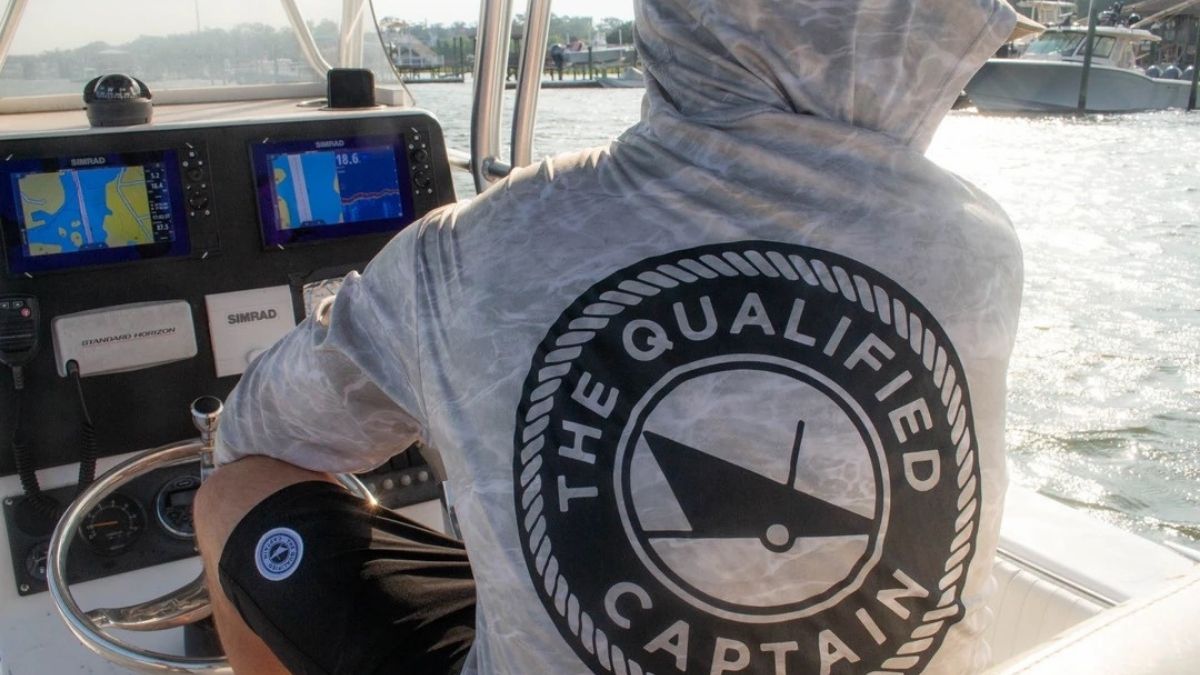 With so many boating-related Instagram accounts these days, it can be hard to stay up-to-date with e...
May 17, 2022 Read more 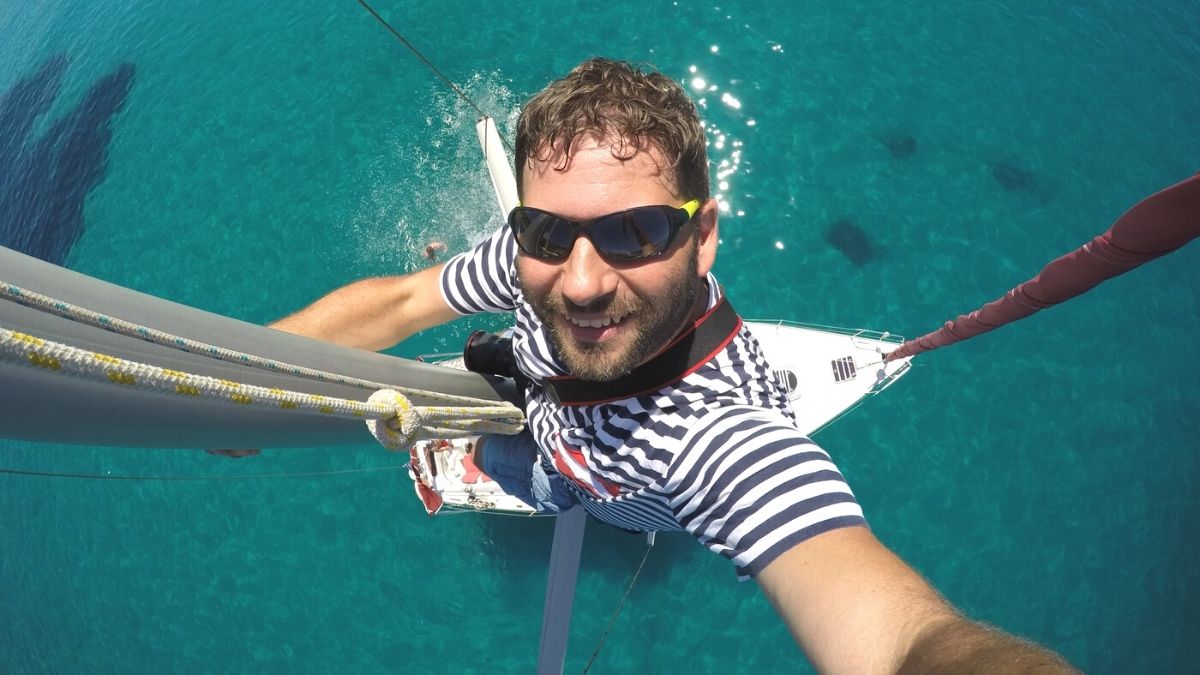 Best 4 Cameras to Take Out on the Water

Whether you’re going on a solo boating adventure or with family/friends, you can’t leave your compan...
May 10, 2022 Read more 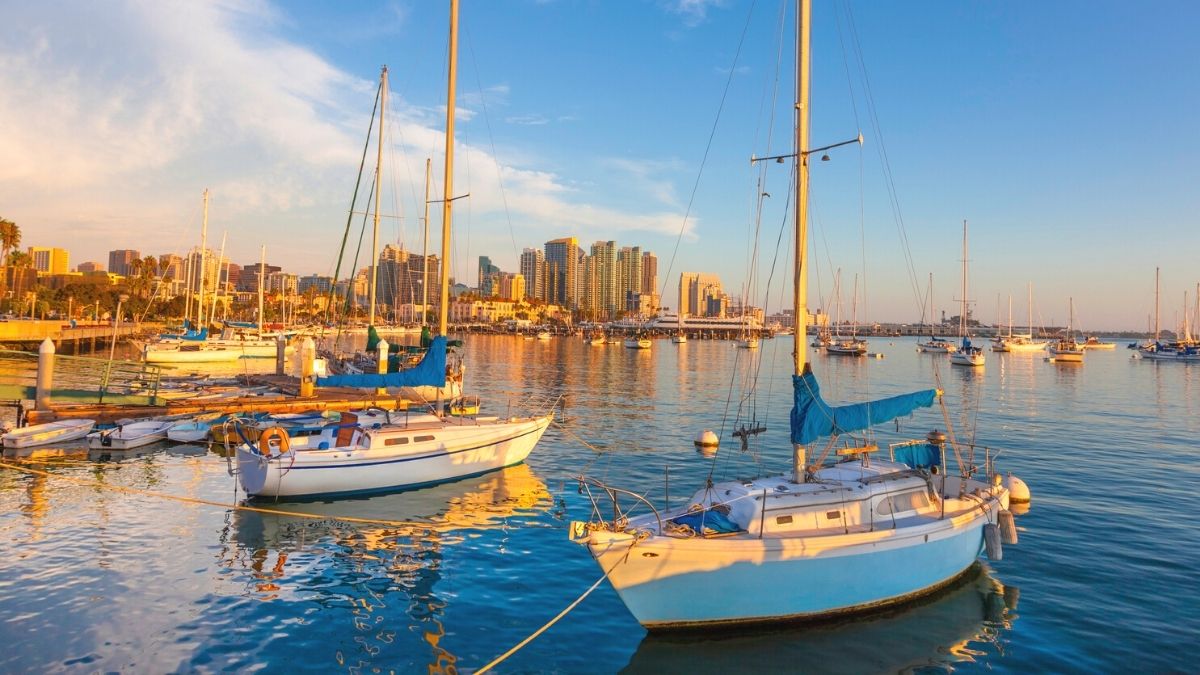 The Most Stunning Locations to Visit When Boating in California

Going out on the water, whether to fish or to take a leisurely ride, possesses a unique feeling comp...
April 7, 2022 Read more 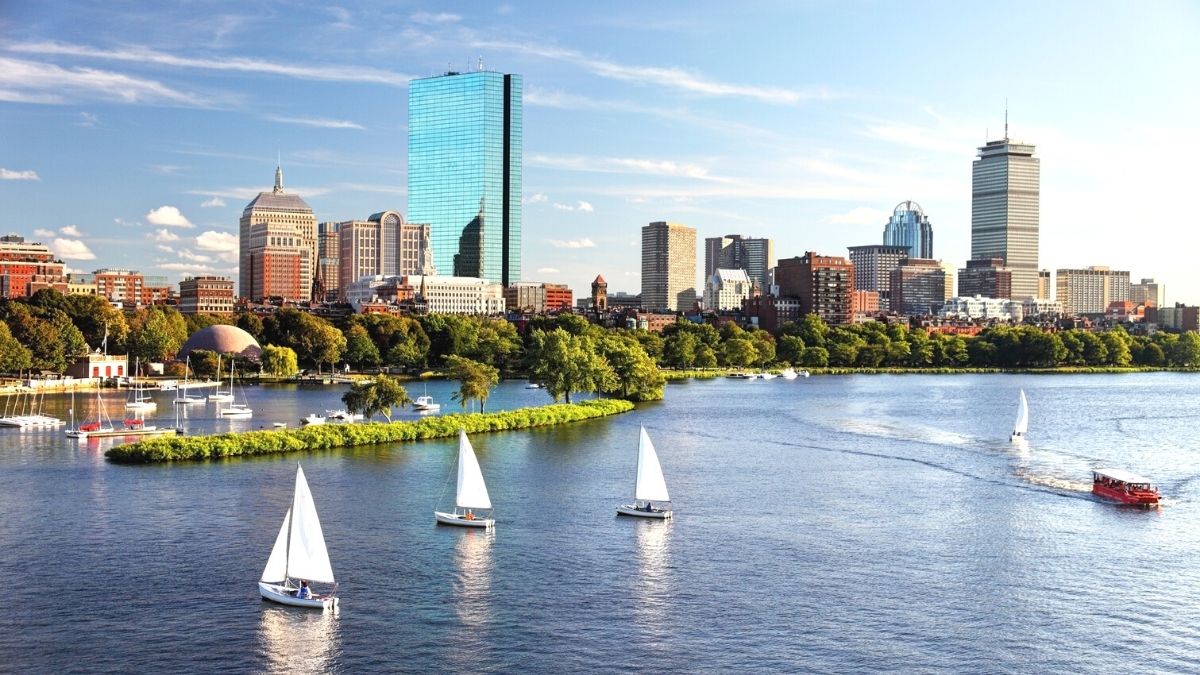 The Best Boating Locations in Massachusetts

Massachusetts is one of the smaller states in the US, while also having a very diversified landscape...
April 4, 2022 Read more